The new BMW M4 is the hottest German car at the moment. So don’t be surprised if it’s constantly trying to get your attention. And what’s the best type of content for an advanced, sporty coupe? Drag racing, of course, the ultimate bragging tool.

We’ve already seen several races featuring the M3 and M4. While the cars have been compared to Porsches or Alfas, it’s pretty obvious that most German car fans want races against Audi and Mercedes-AMG models. These three brands/models have been competing for a really long time.

After comparing the M3 sedan against an RS4 wagon, Carwow magazine took the bright yellow M4 Competition against an RS5 and the Mercedes-AMG C63 S, all three having coupe bodies. This is something we’ve already seen, but the outcome is somehow different.

In the first two races, the Audi RS5 does indeed dominate the other two. It’s the only one currently offered with all-wheel-drive, so it accelerates faster, especially under damp conditions. This is still a bit surprising, considering the car has the smallest engine and is down about 60 hp on its rivals.

But in the third race, Mat Watson does manage to get the perfect M4 launch and win. When xDrive is eventually added, the Bimmer will easily become the fastest in its class and should stay that way, since the RS5 and C63 will either downsize or stop existing in the next few years.

Overall, it’s still a game of inches, which continues with rolling races and brake tests. Weight really does appear to affect them, to the point where a Tesla Model 3 really is in the same league. That’s actually going to be the biggest thorn in the back of BMW. But overall, fans of the brand should be very happy with the way the M4 came out. And if they want, there’s now a fully electric alternative, the i4. 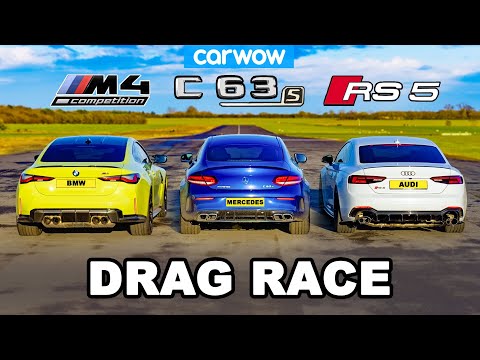