With rumors swirling about an upcoming iPad Pro refresh, which may be announced as part of an alleged Apple Event on Tuesday, March 23, it appears that at least one accessory maker has already started preparing. 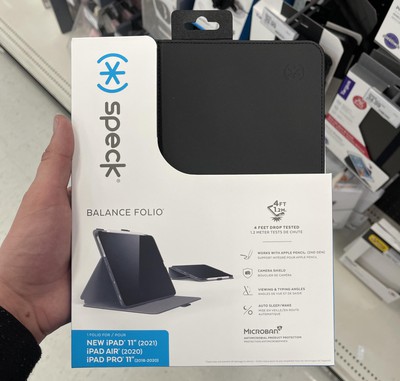 A photo shared on Reddit today shows what appears to be a Speck folio that is listed as being compatible with an as-yet-unannounced 2021 model of the 11-inch iPad Pro, in addition to older models of the 11-inch iPad Pro and the 10.9-inch iPad Air. The user who submitted the photo said they found the folio on the shelf at Target, but when they attempted to purchase it, the checkout system said the item cannot be sold until April 6.

While it is hard to draw any firm conclusions from photos like these, it is possible that Speck has learned that the next 11-inch iPad Pro will have very similar to identical dimensions as the current model. This wouldn’t be too surprising, as there haven’t been any rumors of a major redesign for the next iPad Pro, with key new features expected to include a Mini-LED display, faster A14X chip, and 5G support on cellular models.

We wouldn’t read too much into Target’s alleged April 6 on-sale date for the Speck folio either, but it’s at least within the ballpark of the late March to early April timeframe for the next iPad Pro update that was reported by DigiTimes earlier today.

Interestingly, most rumors have only mentioned a new 12.9-inch iPad Pro and not an 11-inch model, but the devices are usually updated simultaneously. March is a common month for Apple to announce new or updated products, with other rumored products including the long-awaited AirTags, a new Apple TV, new AirPods, and more Apple silicon Macs.