On paper, the 2021 Porsche 911 Turbo S has the upper hand over the Audi R8 V10 Performance because two boosty snails and six cylinders are more than enough to fend off a free-breathing V10. In the real world, forced induction has the last laugh when it comes to straight-line results.
Motor magazine from Australia has pitted the German rivals against each other in a series of three acceleration tests, and the 911 made easy work of the R8 in all three of them. Zero to 100 kilometers per hour (62 miles per hour) took 2.58 and 3.27 seconds, which is a huge difference even though the mid-engined Audi is superior in terms of exhaust and induction sounds.

Considering that even the lowly Carrera has more power than advertised, it shouldn’t come as a surprise that a Turbo S is this quick and fast. The Audi, by comparison, is the more boring sibling of the Lamborghini Huracan. Boring may not be the right word to describe the styling, however, because the R8 V10 looks far more exotic than other four-ringed models in the lineup.

More expensive than the RS e-tron GT electric sports sedan, the fixed-head coupe body style of the R8 starts at $142,700 for the rear-driven base model. Level up to the all-wheel-drive option, and you’re looking at $196,700 before freight charge and options.

The 911 is better spread in terms of variants and pricing, starting at $101,200 for the Carrera and topping at $219,800 for the Turbo S Cabriolet sans extras. On that note, can you imagine the window sticker and performance of the 992.2-generation GT2 RS? 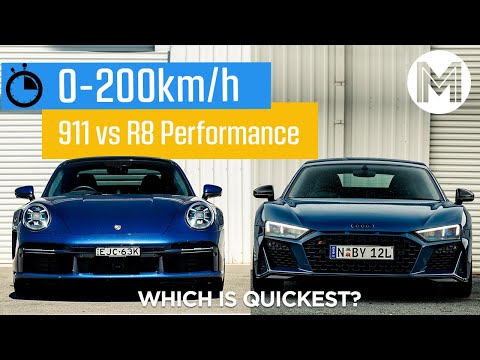