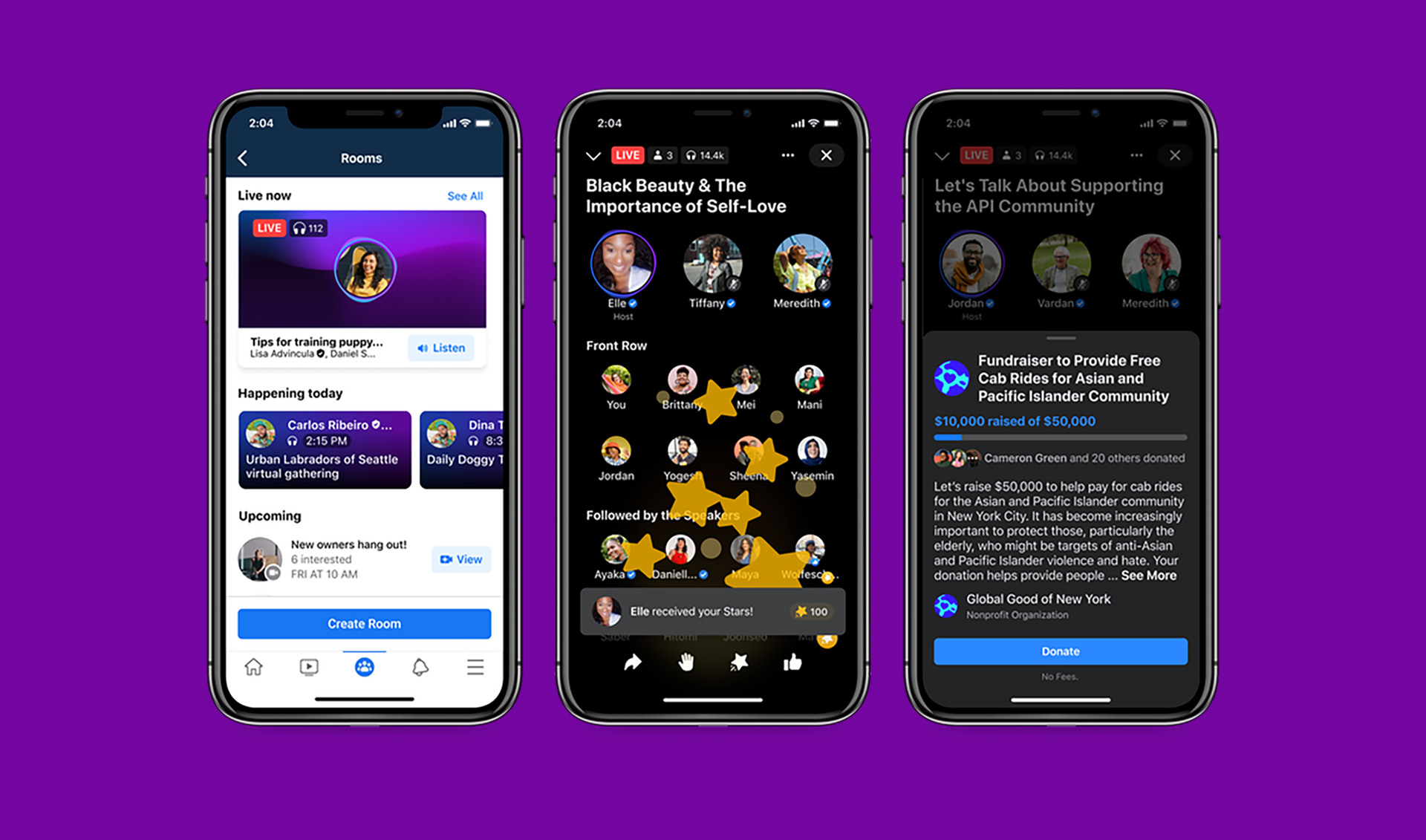 “We think that audio is, of course, also going to be a first-class medium, and there are all these different products to be built across this whole spectrum,” Zuckerberg told reporter Casey Newton.

About Facebook’s Clubhouse clone, called Live Audio Rooms, Zuckerberg added, “You already have these communities that are organized around interests, and allowing people to come together and have rooms where they can talk…I think it’ll be a very useful thing.”

In a blog post, Facebook highlighted the fact that it’s baking creator monetization into Live Audio Rooms (something Clubhouse is working on adding post-launch). Creators who host Rooms will be able to receive Facebook’s onsite currency, Stars, from fans, just like streamers do. They’ll also be able to charge one-time pay-per-view (er, pay-per-listen) fees for certain rooms/events, and monthly subscriptions for ongoing access.

As for Soundbites, Facebook said it’s introducing a creator fund “to support emerging audio creators and get early feedback on the new product experience.” Details about the fund–how much it will disburse, who might be eligible–were not disclosed.

For now, Facebook is working with creators like YouTuber and comedian Drew Lynch (2.25 million subscribers) to “experiment with different concepts” for Soundbites, and plans to refine the feature before launching it wide, the company said.

Podcast tools will roll out “within the next few months,” Facebook said, and there’s no public ETA for the audio mixing tools.

This news comes a day after Clubhouse, which is rapidly becoming a major figure in the audio space (along with Hollywood and Silicon Valley), announced its third funding round.

The invite-only app closed its Series B in January; that round raised an undisclosed amount of money and valued Clubhouse at a staggering $1 billion.

This round’s amount of funding is similarly undisclosed, but Clubhouse did reveal the Series C is being led by Andrew Chen at a16z, with participation from DST Global, Tiger Global, and Elad Gil.

Fresh funding “will allow us to heavily scale our team to support international growth, invest in localization and accessibility features, launch more programs like the Creator First accelerator to help get paid, invest deeply in discovery to help people find the best rooms, and continue to scale our support and community health teams,” Clubhouse said in a blog post.

It’s official: the D’Amelios will make their bow on Hulu Sept. 3. The first family of TikTok announced the date in...

The cult-favorite music video for Rick Astley’s 1987 single “Never Gonna Give You Up” has joined YouTube’s illustrious 1 billion...

Instagram is doubling the maximum length of its TikTok copycat, Reels, which can now be up to 60 seconds long....