Arc System Works has just announced that Guilty Gear Strive is being delayed until June 11, 2021. The game was originally planned to be released on April 9, 2021 — which is just 37 days away from today.


“We have made the tough decision to move the release date of ‘Guilty Gear Strive’ (previously planned for April 9, 2021) to June 11, 2021,” said Arc System Works on Twitter. This is extending the wait by an additional 63 days.


It’s been revealed that the reason for the delay is so that Arc System Works can use the feedback that was received after the Open Beta Test to provide the best game possible.

“Since we have received valuable feedback after the recent Open Beta Test, we would like the most of this opportunity to provide the best game possible,” continued Arc System Works. “We need extra time to polish some aspects of the game, such as the online lobbies and the server’s stability.”

Notably, the beta’s servers were unable to handle the traffic that came in during the scheduled beta time. This caused Arc System Works to extend the beta period so that players were able to properly participate in the Open Beta Test.

“We believe it best to use the extra time to improve the game’s quality and provide a better experience to all our players,” said Arc System Works. “Thank you for your patience and understanding.” 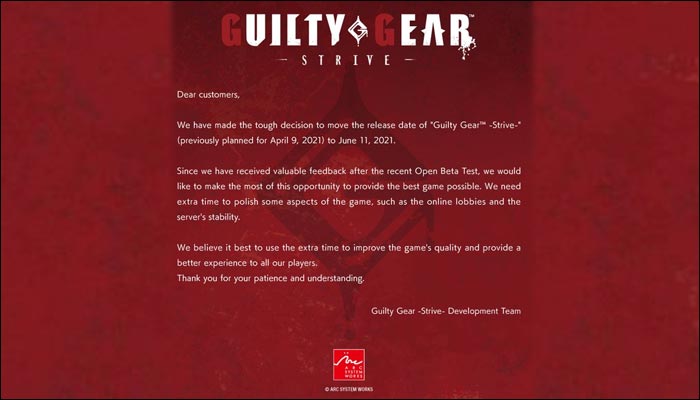