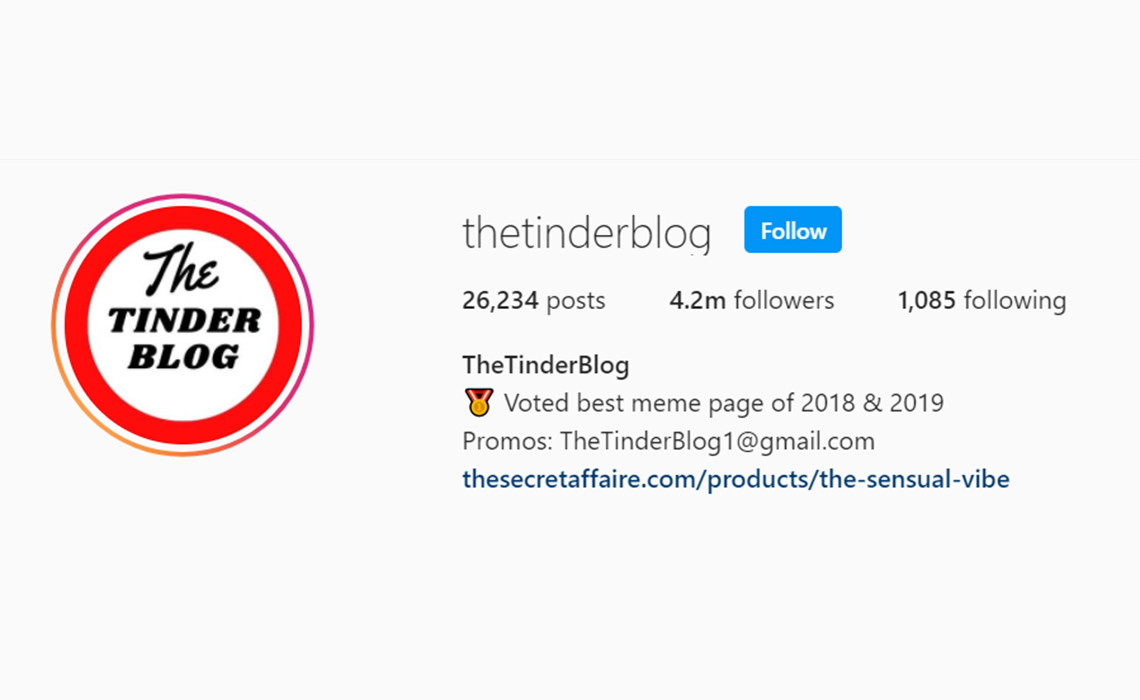 The firm (not affiliated with buzzy audio platform Clubhouse) did not disclose financial details of the acquisition, but did say that The Tinder Blog, which has 4.2 million followers, brings in “an annual net income in excess of one million dollars” and generates more than one billion impressions per month.

The Tinder Blog is an aggregator account, so it doesn’t generate its own original content. Instead, it scrapes the web for other people’s clever tweets, Facebook posts, and memes. (We’ve previously about the complicated attribution and compensation issues associated with some aggregator accounts; you can read that here.)

This is the first meme account Clubhouse Media has purchased, but won’t be the last: the company has plans to “acquire additional aggregator accounts in the months ahead, including deals in the comedy, travel, pet, and personal health market segments,” it said in a statement.

Perhaps relatedly, it praised The Tinder Blog’s ability to attract big-name advertisers; since launching in 2015, the account has snagged brand deals from McDonald’s, Amazon Prime, Dunkin Donuts, and Samsung.

Chris Young, Clubhouse’s cofounder, said the firm became interested in acquiring The Tinder Blog because “we have been actively looking to expand our reach beyond traditional influencers to incorporate and reach more channels, niches, and outlets in the social media landscape.”

Young added that The Tinder Blog comes with a “hyper-loyal fandom,” and that aggregator accounts “make for highly sustainable and scalable businesses.”

YouTube has today announced its original programming slate for the 2021 Tokyo Olympics. Four new projects will roll out in...

Toy manufacturer Jazwares is teaming up with kids’ content giant Moonbug for a brand new YouTube series based on its...

Snap has struck a multiyear agreement with Universal Music Group (UMG) that adds the publisher’s vast catalog of recorded songs...

YouTube CEO Susan Wojcicki says she keeps an ear to the ground when it comes to drama that proliferates across...